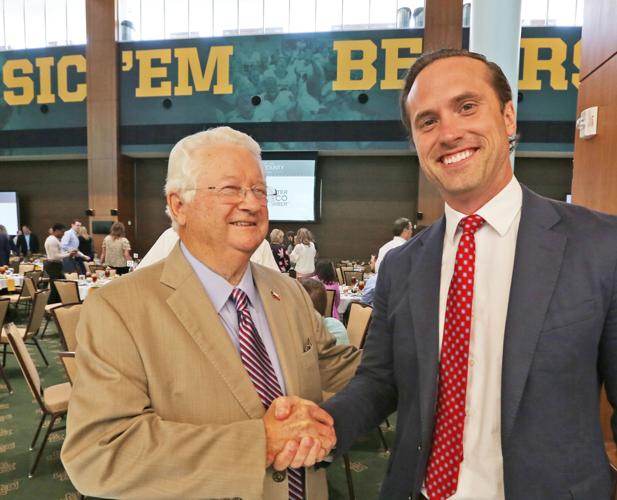 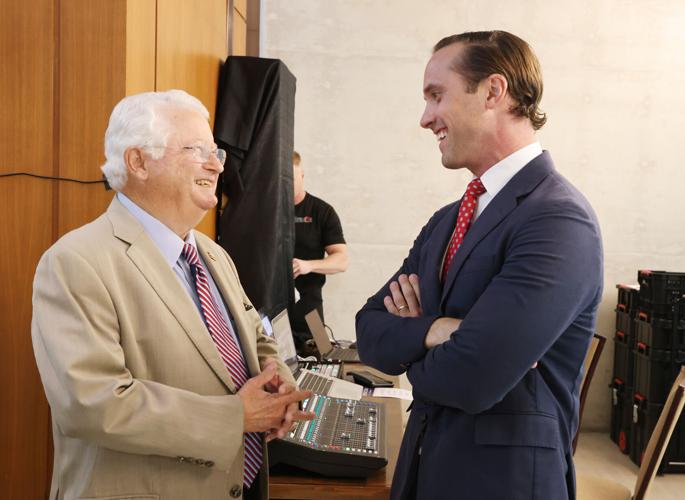 McLennan County Judge Scott Felton, left, and Waco Mayor Dillon Meek talk Thursday at the State of the City and County Luncheon at the Baylor Club. 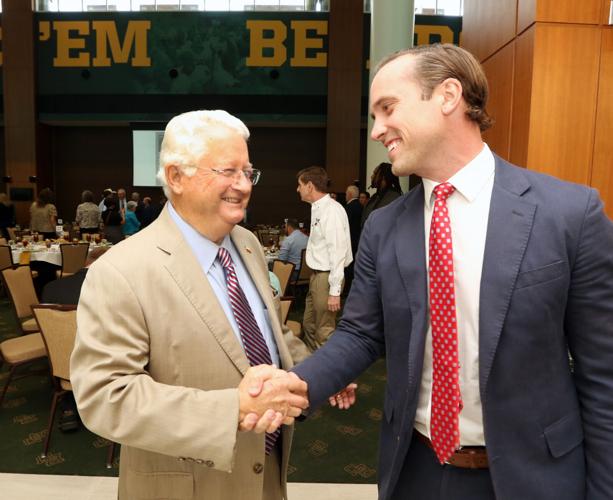 But with interest from new businesses intensifying, the city and county must keep the workforce trained and able to fill positions when they are created. The community leaders agreed funding a multimillion-dollar industrial training center on land owned by the Waco Industrial Foundation would help. Texas State Technical College in Waco is leading efforts to get it built and would own and operate it.

Private businesses would play a crucial role in its success. Felton said efforts are underway to secure donations of equipment and training curriculum.

Felton and Meek spoke to about 200 people attending the State of the City & County Luncheon held at The Baylor Club in McLane Stadium. They said the Waco City Council and McLennan County Commissioners Court each lowered the tax rate for the new budget year that begins Oct. 1. The county adopted its no-new-revenue rate, while the city’s rate is almost 12% higher than its no-new-revenue rate.

The county will spend about $39 million to create a judicial center in the old jail next to McLennan County Courthouse downtown. Financing will come from the nearly $50 million it received from the federal American Rescue Plan Act, as well as from existing bonded indebtedness. The county also has allocated American Rescue Plan money to nonprofits such as Meals on Wheels and Friends for Life, to local volunteer departments and to water-related infrastructure projects.

The county is advertising for a construction manager-at-risk to oversee the county jail conversion that creates space for courtrooms, jury rooms, the district attorney’s office, the district clerk’s office and justices of the peace. The project also includes renovations of 9,700 square feet of the Courthouse Annex’s third floor.

Meek said the city allocated $85,000 for a program aimed at getting feedback from builders, contractors and developers on the city’s permitting process.

“We want to make it as simple and efficient as possible,” Meek said.

He said Waco is enjoying outstanding job creation, but workforce development, financial security for residents and affordable housing remain issues to be addressed and championed in coming years.

Meek said quality of life projects include plans for a performing arts center somewhere downtown, possibly at Franklin Avenue and University Parks Drive; a new Eastern Little League ballpark; and continued efforts to revitalize Lions Park, “a community asset” that fell into disrepair and has been leveled to make room for a new attraction still in the planning stage.

The city has begun advertising for professional design services related to the Bledsoe-Miller project, according to the local office of the Associated General Contractors of America.

#44. Control and valve installers and repairers, except mechanical door

#9. Sales representatives, wholesale and manufacturing, except technical and scientific products

#2. First-line supervisors of police and detectives

Stay up-to-date on the latest in local and national government and political topics with our newsletter.

FAIRBANKS, Alaska (KTUU) - Alaska State Troopers say a Fairbanks man is dead after flipping his plane in a lake at low speed Wednesday afternoon.A dispatch by troopers said 75-year-old Jerald Stansel was pulled from the submerged plane after witnesses at the Chena Marina Airstrip reported that “the plane flipped...

Kimberly Layne Tippitt, 57, of Lawrenceburg, Indiana, passed away Saturday, October 1, 2022, in Lawrenceburg, IN. She was born May 8, 1965, in Fairbanks, Alaska, daughter of the late Wayne Clements and Betty (Norwood) Clements. Kim was very family oriented and loved spending time with everyone, especially her grandkids. She...

The Most Notorious And Baffling Murder In The History Of Fairbanks!