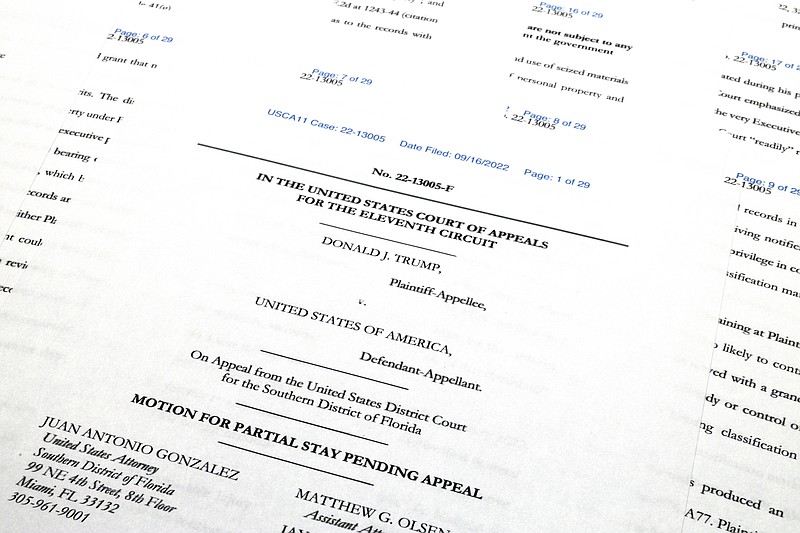 Pages from the Justice Department’s motion to the 11th Circuit U.S. Court of Appeals in Atlanta are photographed Friday, Sept. 16, 2022. The Justice Department asked the federal appeals court to lift a judge’s order that temporarily barred it from reviewing a batch of classified documents seized during an FBI search of former President Donald Trump’s Florida home last month. (AP Photo/Jon Elswick)

The department told the 11th Circuit U.S. Court of Appeals in Atlanta that the judge’s hold, imposed last week, had impeded the “government’s efforts to protect the nation’s security” and interfered with its investigation into the presence of top-secret information at Mar-a-Lago. It asked the court to remove that order so work could resume, and to overturn a judge’s directive forcing the department to provide the seized classified documents to an independent arbiter for his review.

“The government and the public would suffer irreparable harm absent a stay,” department lawyers wrote in their brief to the appeals court.

U.S. District Judge Aileen Cannon’s appointment of a so-called special master to review the documents, and the resulting legal tussle it has caused, appear certain to slow by weeks the department’s investigation into the holding of classified documents at the Florida property after Trump left office. It remains unclear whether Trump, who has been laying the groundwork for a potential presidential run, or anyone else might be charged.

The FBI says it took about 11,000 documents, including roughly 100 with classification markings found in a storage room and an office, while serving a court-authorized search warrant at the home on Aug. 8. Weeks after the search, Trump lawyers asked a judge to appoint a special master to perfrom an independent review of the records.

Cannon last week directed the department to halt its use of the records until further court order, or until the completion of a report of an independent arbiter who is to do his own inspection of the documents and weed out any covered by claims of attorney-client privilege or executive privilege.

On Thursday night, she assigned Raymond Dearie, the former chief judge of the federal court based in Brooklyn, to serve as the arbiter — also known as a special master. She also declined to lift an order that prevented the department from using for its investigation about 100 seized documents marked as classified, citing ongoing disputes about the nature of the documents that she said merited a neutral review.

“The Court does not find it appropriate to accept the Government’s conclusions on these important and disputed issues without further review by a neutral third party in an expedited and orderly fashion,” she wrote.

The Justice Department on Friday night told the appeals court that Cannon’s injunction “unduly interferes with the criminal investigation,” prohibiting investigators from “accessing the seized records to evaluate whether charges are appropriate.”

Cannon has said investigators were free to do other investigative work that did not involve a review of the documents, but the department said Friday that was largely impractical. Noting the discovery of dozens of empty folders at Mar-a-Lago marked classified, it said the judge’s hold appeared to bar it from “further reviewing the records to discern any patterns in the types of records that were retained, which could lead to identification of other records still missing.”

The department also asked the appeals court to reject Cannon’s order that it provide the newly appointed special master with the classified documents, suggesting there was no reason for the arbiter to review highly sensitive records that did not raise questions of legal privilege.

“Plaintiff has no claim for the return of those records, which belong to the government and were seized in a court-authorized search,” department lawyers wrote. “The records are not subject to any possible claim of personal attorney-client privilege. And neither Plaintiff nor the court has cited any authority suggesting that a former President could successfully invoke executive privilege to prevent the Executive Branch from reviewing its own records.”

Cannon has directed Dearie to complete his work by Nov. 30 and to prioritize the review of classified documents. She directed the Justice Department to permit the Trump legal team to inspect classified records with “controlled access conditions” — something government lawyers said Friday was needless and harmful.

The DOJ Believes Trump Still May Not Have Returned All White House Documents After FBI Already Seized Thousands Of Pages Of Material: Report

CANTON ‒ Nan Whaley was in town Thursday night.Of course, that was no secret to anyone who happened to drive the section of I-77 next to the Pro Football Hall of Fame. The name of the Democratic candidate for Ohio governor was plastered in bright lights on the two giant...

The latest Tweet by Bloomberg states, 'Trump’s lawyers failed to stop former White House Press Secretary Stephanie Grisham from being deposed in a defamation lawsuit after arguing she shouldn’t testify while on painkillers for a broken foot ...' Socially Team Latestly| Oct 07, 2022 06:45 AM IST Trump’s lawyers failed...