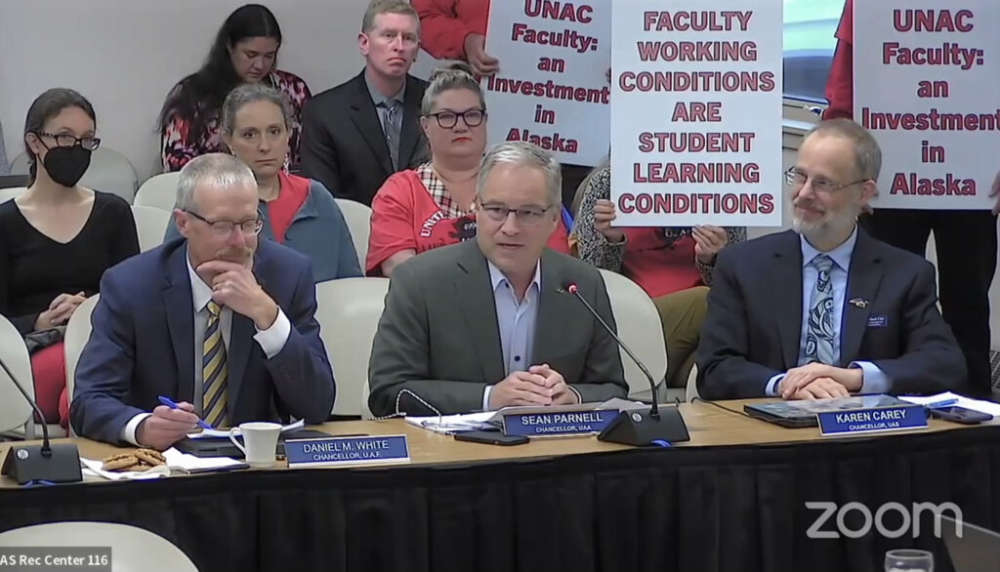 Juneau, Alaska (Alaska Beacon) – The University of Alaska Board of Regents received a preview of a plan to raise pay for employees. But it’s still unclear whether an increase will be a part of resolving ongoing contract negotiations with the university faculty union.

The regents met Thursday in Juneau at the University of Alaska Southeast.

It was the first time the full board met since the faculty union United Academics filed an unfair labor practice complaint with the Alaska Labor Relations Agency against the administration on Aug. 29.

More than 30 faculty union members and members from other unions rallied at the Auke Bay roundabout around 8 a.m. ahead of the board’s 8:30 a.m. start time. People wore red United Academic shirts and waved signs.

“It’s a public opportunity to make it known that faculty are working without a contract,” Maier said on the phone Thursday afternoon. “It’s good to have reminders for the Board of Regents that faculty do care about this and we’re paying attention and we deserve a fair contract.”

The faculty union and university administration have been negotiating a new contract for just over a year.

“I think faculty are kind of not sure what to make of it. It still just seems to be dragging on and we don’t understand why,” Maier said.

Though contract negotiations were not on the Board of Regents Thursday agenda, its presence was felt. Union members were in the audience wearing red and holding signs – which read, “UNAC Faculty: an investment in Alaska,” and, “Faculty working conditions are student learning conditions” – behind people presenting to the board.

When the governor’s budget director Neil Steininger spoke about planning the next state budget, the chair of the university’s faculty alliance governance group had some pointed questions.

“I’m going to talk on behalf of my faculty here. For the last six, seven years, the purchasing power of faculty went down by 20%. They have received only one raise, 1%. Does the governor have any kind of answers or solution to the ongoing – I would say – chaos in our negotiations with administration?” said Gökhan Karahan, professor of accounting and finance at the University of Alaska Anchorage.

The question went unanswered, but a bit later in the meeting, Regent Dale Anderson objected to Karahan’s use of the word “chaos.”

“I’m going to get slapped upside the head for this comment, but,” he said, “I object to the characterization of our union negotiations using the word ‘chaos.’ This type of wording doesn’t bring us any closer to a fair settlement in our quest to do that. I just would like to voice my objection to that term.”

The union and the administration last met in federal mediation on Aug. 31. In a Sept. 2 update to the university community, President Pat Pitney said the union presented a series of proposals at that last meeting, which the administration is reviewing.

The union had previously agreed to the administration’s most recent salary compensation offer – increases of 3%, 2.75% and 2.5% over three years, which is slightly up from the original “best and final offer.”

In its preview of the university’s next budget proposal during the Board of Regents meeting Thursday, the university said it was considering a 2.75% increase across all employee groups, including the faculty union, which would amount to $9 million in state funding. This would be in line with what the union has agreed to.

Abel Bult-Ito, professor of neurobiology and neurophysiology at the University of Alaska Fairbanks, and president of the faculty union, said he thought that was a “positive development.”

The board is scheduled to agree to a budget at its November meeting.

The Board of Regents meeting continues Friday, starting at 8:30 a.m. The faculty union plans to again be rallying, this time in front of the entrance to the Student Recreation Center, where the meetings are being held, “just to welcome the regents into the building,” Bult-Ito said.

The next scheduled federal mediation between the university administration and the faculty union is Sept. 19.

By BLM Alaska Fire Service on September 26, 2022 Signs of smoke are no cause for alarm to Tanacross, Tok or Alaskan Highway motorists  Two BLM Alaska Fire Service firefighters ignite a burn pile in snowy conditions while burning woody debris piles on BLM-Managed land near Tanacross in 2020. FAIRBANKS, Alaska – In early October, the Bureau of Land...