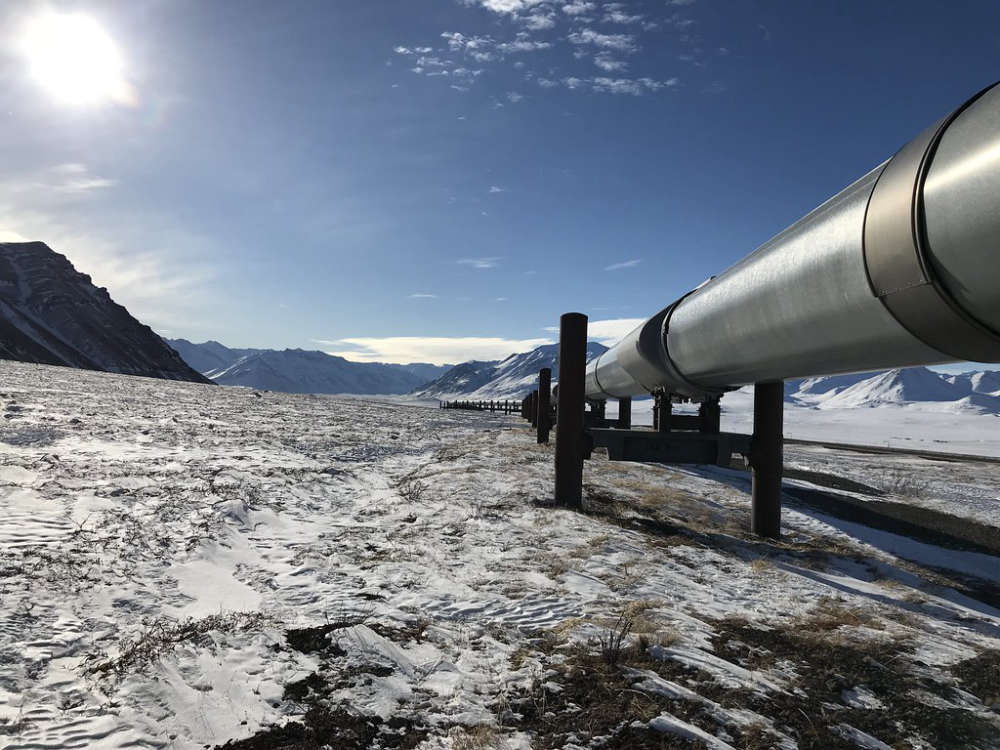 “Trans-Alaska Pipeline” by USFWSAlaska is marked with Public Domain Mark 1.0.

The change to the state’s outlook was made public in a notice published Monday by the Alaska Department of Revenue. The notice was part of a department procedure that calls for a forecast update if prices vary by more than 10% from what was expected.

Through the first two and a half months of the fiscal year, that forecast was accurate: The price of a barrel of North Slope Crude averaged $103.09 between July 1 and Sept. 15.

But on Monday, Revenue officials — relying on global futures markets that trade in oil from Europe’s North Sea — said they expect the average annual price to drop to $91.96 per barrel by the end of the fiscal year.

“While this update does not incorporate the level of rigor and detail that we put into the official spring and fall revenue forecasts, it does give an indication of how revenues are expected to perform based on the most currently available information,” the new estimate said.

If the forecast holds true, it would not significantly affect state services, but it would erase most of $1.2 billion in bonus funding for K-12 public schools.

This spring, state lawmakers earmarked $1.2 billion for public schools in the 2022-2023 school year. Because oil prices were expected to be high, they set aside another $1.2 billion in bonus funding — an advance payment for the 2023-2024 school year — calling it a way to save for the future.

Vickie Brown passed away peacefully in her sleep Oct 1, 2022, at the age of 92, in Bemidji, MN.Born to Victor Burditt Brown and Ruth Kathryne Desiderio in Chicago, IL, Vickie grew up in the Chicago area, graduated from Evanston Township High School, and attended Illinois State University in Normal,...

News Home More from News of the North (Courtesy photo.) Juneau, Alaska (KINY) - Alaska Governor Mike Dunleavy returned this week from a follow-up trip to communities heavily impacted by the Western Alaska storm, the remnants of Typhoon Merbok. The State has taken about 450 applications under the Individual Assistance...