Authorities in the West Texas town of Presidio issued an arrest warrant for the person suspected of piloting a single-engine aircraft with five migrants on board. The plane crashed shortly after take-off from the Presidio Airport. The Presidio County Sheriff’s Office issued the warrant Saturday for Tobias Penner Peters of Seminole, Texas.

On Thursday afternoon, Presidio County Sheriff’s deputies located the aircraft on the desert floor just north of the airport. With the help of Presidio Police officers, Border Patrol agents, and local fire and EMS personnel, five passengers were located and treated for various injuries — some severe. Several of the injured migrants were transported to hospitals in El Paso for advanced care. The pilot absconded shortly after the accident. 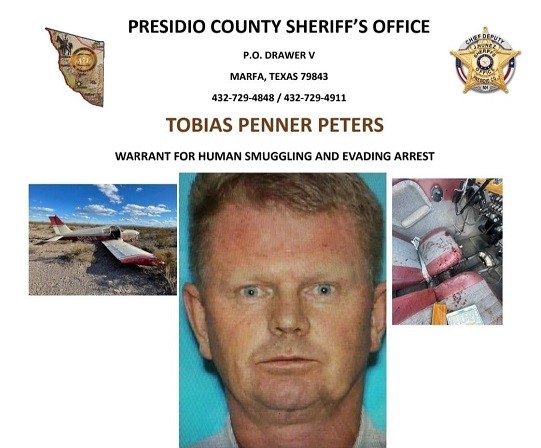 The pilot, who authorities believe to be Penner, is thought to have suffered severe injuries as well. It is believed that Penner may have sustained severe head injuries and may have lost an eye during the crash. As reported by Breitbart Texas, FAA records indicate the aircraft is registered to an owner, also of Seminole, Texas. According to the records, Penner is not the listed owner of the 1963 single-engine Piper Dakota.

According to law enforcement authorities at the scene, a preliminary investigation revealed the excess weight of the passengers (six in a four-seat aircraft) and low fuel may have contributed to the accident.

Authorities said Penner is believed to have ties to Ojinaga, Mexico, directly across the border from Presidio. Penner faces charges of Felony Human Smuggling, Evading Arrest, and Deadly Conduct.

The Presidio area is in the least traversed Border Patrol sector along the southwest border due to its remoteness. The Big Bend Sector has nonetheless experienced a near 100% increase in migrant crossings since last year in November. More than 3,200 migrants were apprehended in the remote West Texas region during the month of November compared to slightly more than 1,600 during the same month 2020.

As reported by Breitbart Texas, Border Patrol agents apprehended more than 1.9 million migrants who illegally crossed the southwest border with Mexico between ports of entry during 2021. Another estimated half-million migrants managed to avoid apprehension and sneak into the U.S.

Randy Clark is a 32-year veteran of the United States Border Patrol.  Prior to his retirement, he served as the Division Chief for Law Enforcement Operations, directing operations for nine Border Patrol Stations within the Del Rio, Texas, Sector. Follow him on Twitter @RandyClarkBBTX.

UNITED NATIONS (AP) — Russia’s war on Ukraine threatens to devastate the economies of many developing countries that are now facing even higher food and energy costs and increasingly difficult financial conditions, a U.N. task force warned Wednesday.U.N. Secretary-General Antonio Guterres released the report saying that the war is “supercharging”...

NewsWorldEuropePutin’s ally Viktor Medvedchuk was captured by Ukraine weeks after he escaped house arrest Inside the Mariupol theatre where hundreds were killed by Russian shellingJoe Biden has accused Russia’s president Vladimir Putin of committing a “genocide” in Ukraine.The US president on Tuesday was speaking in Iowa, where he declared that...

Mitch McConnell explains why he will still support Donald Trump Former president Donald Trump has endorsed Dr Mehmet Oz to represent Pennsylvania in the US Senate. “I have known Dr. Oz for many years, as have many others, even if only through his very successful television show,” Mr Trump said...

China Closes Guangzhou To Most Arrivals As Outbreak Spreads

BEIJING (AP) — The manufacturing hub of Guangzhou closed itself to most arrivals Monday as China battles a major COVID-19 surge in its big eastern cities. Shanghai has taken the brunt of the surge, with another 26,087 cases announced on Monday, only 914 of which showed symptoms. The city of...