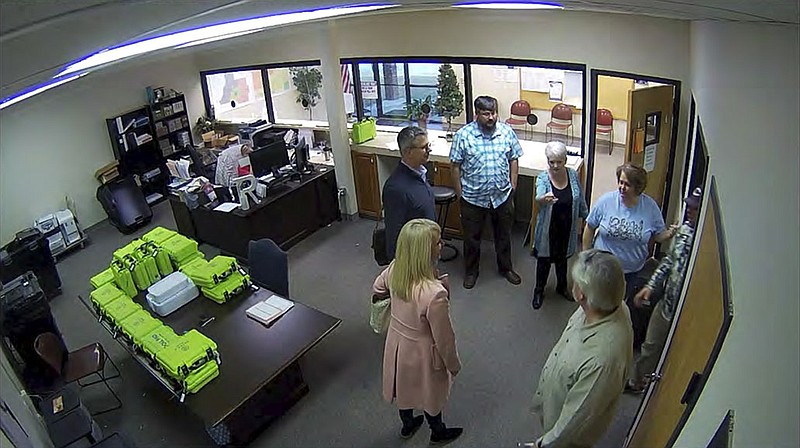 This Jan. 7, 2021, image taken from Coffee County, Ga., security video, appears to show Cathy Latham (center, long turquoise top), introducing members of a computer forensic team to local election officials. Latham was the county Republican Party chair at the time. The computer forensics team was at the county elections office in Douglas, Ga., to make copies of voting equipment in an effort that documents show was arranged by Sidney Powell and others allied with then-President Donald Trump. (Coffee County, Georgia via AP)

ATLANTA — A woman identified by a prosecutor as one of Georgia’s fake electors for former President Donald Trump can be seen on a video released Tuesday spending hours with a group of computer analysts after she welcomed them into the Coffee County elections office to copy nonpublic election data on Jan. 7, 2021.

The video appears to contradict sworn statements by Cathy Latham, a member of the Georgia Republican Party’s executive committee at the time, according to a court filing in an election security lawsuit. Latham said in a deposition last month that she didn’t remember much of what happened or who was there that day, and she repeatedly invoked her Fifth Amendment right against self-incrimination.

The filing comes in response to Latham’s attorneys’ attempt to quash subpoenas for her personal electronic devices, including any cellphones, computers and storage devices.

Video from inside the elections office is further evidence that Trump supporters and computer analysts penetrated an election server, voter check-in computers, ballot scanners and other voting equipment in Coffee County, a rural area 200 miles south of Atlanta where Trump received 70% of the vote.

The Georgia Bureau of Investigation and the secretary of state’s office are investigating, and a Fulton County special grand jury looking into Trump’s efforts to overturn the 2020 election is seeking information about the Coffee County incident.

The video was made public Tuesday after it was disclosed by Coffee County’s government Friday in response to the lawsuit. It supplements previously released security video that showed the outside of the elections office.

Latham was one of 16 Republicans who attempted to award Georgia’s electoral votes to Trump on Dec. 14, 2020, and then less than a month later escorted the tech experts into the Coffee elections office. They worked for the Atlanta firm SullivanStrickler, which billed Trump attorney Sidney Powell $26,000 for the job, according to subpoenaed documents.

“These new facts — which Latham pretends do not exist — refute her unsubstantiated insistence that she did not ‘participate in whatever SullivanStrickler and others were allegedly doing,'” according to a court filing late Monday by plaintiffs seeking documents from Latham. “She literally directed them on what to collect in the office.”

An attorney for Latham, Bob Cheeley, said in a statement Tuesday she has not acted improperly or illegally. Because Latham, the county’s Republican Party chairwoman at the time, wasn’t an elections employee, she couldn’t have authorized computer imaging or ballot scanning, he said.

“She has never denied that she went to the Coffee County elections office on Jan. 7, 2021; instead, she affirmatively testified that she was there,” Cheeley said. “While Mrs. Latham does not pretend to remember the details of all that occurred on that specific date more than a year and a half ago, she does remember going to the elections office after teaching school on Jan. 7, 2021, to check in on some voter review panels from the runoff election, and she truthfully testified to those facts.”

The video shows Latham making introductions, looking at computers and taking selfies on her cellphone with one of the tech experts in an office room. Video images don’t include the election server room, located further within the elections office, that was supposed to be kept secure.

Latham said in a deposition last month that she moved to Texas over the summer. In January 2021, she was chair of the Coffee County Republican Party and was the state party caucus chair for more than 125 of Georgia’s smaller counties.

Fulton County District Attorney Fani Willis, a Democrat who’s leading the investigation into Trump’s efforts to change election results, has notified Latham and the other fake electors that they could face criminal charges.

An attorney for SullivanStrickler has said Latham was a “primary point of contact” in coordinating the computer analysts’ visit to Coffee County.

The copying of software and files from equipment made by Dominion Voting Systems came the day after the Capitol riot in Washington as Congress was preparing to accept presidential electoral votes. The 2020 election results have been upheld by recounts, court cases and investigations. Democrat Joe Biden defeated Trump, a Republican, in Georgia by about 12,000 votes.

The video also shows Jeffrey Lenberg, a computer analyst, in the Coffee elections office later in the month. Lenberg, a skeptic of the 2020 election results, is under investigation in connection with intrusions of voting equipment in Michigan.

While Lenberg was working in the Coffee elections office on Jan. 26, 2021, an elections investigator for the Georgia secretary of state’s office arrived but didn’t appear to recognize Lenberg or suspect wrongdoing.

The investigator was working on a case involving absentee ballots that was unrelated to an investigation of unauthorized access, said Mike Hassinger, spokesman for the secretary of state’s office. The state investigation into the incident wasn’t opened until last March.

The investigator “didn’t know who Jeff Lenberg even was, let alone well enough to recognize him, or what he may have been up to,” Hassinger said. “The secretary of state’s office does not look over the shoulders of every elections office in the state on a daily basis. We respond to allegations when they are raised, but at every stage, information about unauthorized access to Coffee County’s election equipment has been kept hidden.”

Plaintiffs in the election security lawsuit, which include the Coalition for Good Governance and several voters, are opposing an attempt to quash subpoenas for her personal electronic devices, including any cellphones, computers and storage devices.

A judge in the election security lawsuit recently granted the plaintiffs’ request to subpoena documents from Lenberg and former Coffee Elections Board Chairman Ed Voyles, who was in the Coffee elections office on the day data was copied.

Additional records are being sought from other individuals involved, including former Coffee Elections Director Misty Hampton, who made a YouTube video claiming she could change votes; Scott Hall, a bail bondsman who met the tech experts in Coffee; and Doug Logan, CEO of Cyber Ninjas, who also visited Coffee County in January 2021 and later conducted a ballot review in Maricopa County, Arizona.

Latham’s “data likely will reveal additional details about the work performed and information obtained in the breach, what was done with the compromised software and data, and the people involved in planning and orchestrating the breach, which puts voters and future elections at enormous risk,” the filing says.

An exhibit attached to the Monday filing juxtaposes quotes from Latham’s deposition with images pulled from security camera footage that appear to directly contradict her statements.

Latham said that she went to her job as a high school teacher and stopped by the election office briefly that afternoon. But the video image shows her arriving at 11:37 a.m., and time stamps on other images show her there throughout much of the day. She also said she didn’t see specific people and saw others only briefly, but the video images show otherwise.

The lawsuit that includes the fight over Latham’s personal electronic devices was originally filed several years before the 2020 election by individual voters and the Coalition for Good Governance, an election security advocacy group. It alleges that Georgia’s touchscreen voting machines are not secure and seeks to have them replaced by hand-marked paper ballots.

The Monday filing said the plaintiffs have identified multiple documents that Latham failed to produce in response to a previous subpoena. It seeks to have a third party make a temporary forensic copy of her devices and search for responsive documents.

Information for this article was contributed by Mark Niesse of The Atlanta Journal-Constitution (TNS) and by Kate Brumback of The Associated Press.

Beto O’Rourke, Stacey Abrams Struggle This Year To Recreate The Magic Of Their 2018 Campaigns

Beto O’Rourke and Stacey Abrams shot into the political stratosphere four years ago when the fresh-faced Democrats electrified the party on their way to better-than-expected showings in statewide races in deep-red Texas and purple Georgia. But the pair is struggling to build on those near-success stories in a pair of...

Dems Light Up Airwaves In Key Secretary Of State Races

The Democratic Association of Secretaries of State, the party’s main campaign arm for races for states’ chief election officers, is launching its largest-ever TV ad campaign, booking $11 million worth of TV ads across three critical battleground states.The spending from DASS — the first salvo in a general election spending...

Skip to main content This content is only available to subscribers.Get unlimited digital access.$1 for 6 months.Your subscription supports:Investigative reporting that makes our community a better place to work, live and playExpert coverage of high school sports teamsThe best tips on places to eat and things to doDaily newsletter with...

WASHINGTON (AP) — The House committee investigating the Jan. 6 attack on the U.S. Capitol announced Tuesday that it had postponed a hearing scheduled for Wednesday as a hurricane hurtled toward the Florida coast. The committee had planned to hold what was likely to be its final investigative hearing Wednesday...