GREAT BARRINGTON — The Carrie Chen Gallery will present the exhibition “Lily Prince: Both Sides Now” from April 9–May 8. The one-person show presents a selection of Prince’s recent paintings depicting her impressions from the American Southwest and Lake Como, Italy. Prince’s vividly colored paintings reflect the essence of these two regions and call for a celebration of the beauty nature has to offer. A public reception will be held Saturday, April 9, from 3-5 p.m., with a talk by the artist from 3:30-4:15 p.m.

For the first time, “Both Sides Now” pairs watercolors and acrylic paintings from two of Prince’s series, “Lago di Como” and “American Beauty.” The show takes its title from Joni Mitchell’s iconic 1960’s song signifying the value of looking at life from different points of view. Prince combines plein air process and studio practice, drawing observationally in nature to record her impression of a place with a patchwork of pattern, color, and undulating form. Often adding color and combining various drawings together when she returns to her studio in upstate New York, she further develops a visual language that is at once deeply personal and universally significant.

Lily Prince holds a BFA from Rhode Island School of Design (RISD), an MFA from Bard College, and attended the Skowhegan residency. She has exhibited nationally and internationally and was awarded commissions including bythe New York City Department of Cultural Affairs and numerous hotels. She was awarded the prestigious Pollock-Krasner Foundation Grant in painting in 2020. Prince was artist-in-residence at Olana State Historic Site and was awarded residencies at Draftsmen’s Congress at The New Museum, NY; BAU Institute, Italy; and Galerie Huit, Arles, France. Her work has appeared in the New York Times, New York magazine, The Brooklyn Rail, and New American Paintings, as well as in two books by Richard Klin, among other publications. She has lectured at Yale, Vassar, Cornell, RISD, SVA, and Pratt. Prince is an associate professor of painting and drawing at William Paterson University in New Jersey.

Berkshires NAACP to host presentation on redlining in Pittsfield 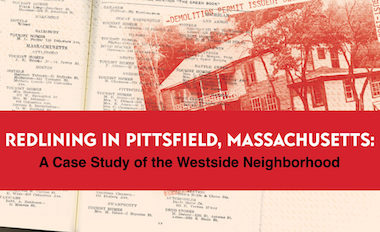 PITTSFIELD — The NAACP, Berkshire County Branch will host a presentation on redlining in Pittsfield, from 1900–1960, at their next general meeting on Wednesday, April 6 at 6 p.m., via Zoom.

In the United States, the practice of redlining is a discriminatory practice in which services are withheld from potential customers who reside in neighborhoods classified as “hazardous” to investment; these neighborhoods have significant numbers of racial and ethnic minorities and low-income residents.

A report commissioned by Greylock Federal Credit Union with the support of Berkshire Bank, the Berkshire County NAACP, and the MCLA Foundation, researched whether housing discrimination in the Berkshires matched what was happening in larger urban areas in the 20th century. Pittsfield was used as a case study because of the high population of Blacks who migrated to the area during the 1920s and 1930s, and because research showed that discriminatory New Deal policies were, indeed, implemented in Berkshire County.

The report was compiled by Kamaar Taliaferro, Susan Denault, Tessa Kelly, and Dr. Frances Jones-Sneed with the assistance of Kelli Newby, Emmanuelle Copeland, Rebecca Park, Aaron Bienek, and Nicholas Russo, with assistance from the Local History Department of the Berkshire Athenaeum.

The report sought to answer three questions: Was there redlining in Berkshire County? If there was, what are the ongoing effects on the Black population? What can be done to alleviate its effects?

“As we strive to forge a more inclusive economy with opportunities for all, we are grateful to gain deep insights from this important study,” said John Bissell, president and CEO of Greylock Federal Credit Union. “Moving to a place of greater equity requires that we understand the history, the policies, and the systems that have shaped our community for decades.”

“After the protests of 2020, many Berkshire residents reflected on the inequities in our society, both nationally and locally,” said Kamaar Taliaferro, NAACP Berkshire County Branch Housing Committee Chair. “In Pittsfield, these are visible as stark racial divisions in income and rates of homeownership. It is difficult to understand these gaps, and nearly impossible to repair them, without historical context. ‘Redlining in Pittsfield, Massachusetts, A Case Study of the Westside Neighborhood’ is a novel attempt to better understand the interlocking and cascading effects of historical housing discrimination, including how opportunities to accrue intergenerational wealth were limited for Black Pittsfield residents. This report will help us reckon with how Pittsfield’s present is built on its past. We hope that in confronting this history, our community can join together and choose to disrupt inequitable systems, and build a more prosperous future for all our community members.”

This event is free the public is encouraged to attend. Non-branch members must register for the Zoom link by emailing [email protected]

LENOX — The Lenox Library will host a presentation by Dr. James Hatt, “Russia: The Inevitability of Now,” on Thursday, April 7 at 5:30 p.m. The program will be held in person as well as on Zoom. Webinar details may be found on the Library’s website. The event is free and open to the public.

From a local bureaucrat in St. Petersburg to President of Russia, Vladimir Putin has been insistent and clear that declarations of independent statehood by lands he considers inherently Russian resulted from the actions of a malevolent America. Since the Chechen war of 1999, Western powers vacillated between willful ignorance and timid acceptance of Putin’s Kremlin, generating a momentum of inevitability to now, the second invasion of Ukraine since 2014.

About the speaker: James Hatt is an English Barrister who joined the UK Foreign and Commonwealth Office and was seconded to Cable and Wireless plc, one of three companies privatized by Prime Minister Margaret Thatcher that retained a “Golden Share” controlled by the Government, which allowed for state guidance on how the Company would develop its overseas operations.

In 1989 Hatt went into Gorbachev’s USSR and negotiated the first agreements on Soviet/European communications. He stayed throughout the Yeltsin era, working across Russia and the former Soviet world, with multiple ventures in Moscow, St. Petersburg, Siberia, and Vladivostok in far eastern Russia. His satellite joint venture in Moscow developed a pan-Russia capability in conjunction with the current Minister of Defence, General Shoigu. Hatt developed cellular interests in Belarus, Kazakhstan, Ukraine, Georgia, and Azerbaijan.

In 1990, Hatt made his inaugural visit to St. Petersburg where he met Vladimir Putin, then advisor on international affairs to the Mayor Sobchak. Over the next 25 years, Hatt had numerous interactions with Putin, his advisors, and associates in St. Petersburg, Moscow, London, and Zurich. 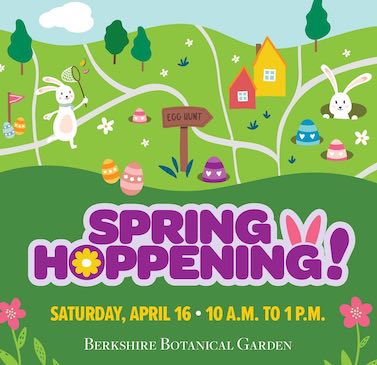 STOCKBRIDGE — Berkshire Botanical Garden will begin its 88th season with its inaugural Spring Hoppening on Saturday, April 16, from 10 a.m.–1 p.m.

A highlight of the Hoppening will be egg hunts taking place in Procter Garden and Lucy’s Garden. With the help of the Garden’s herb associates and other volunteers, upwards of 2,000 “eggs” will be made and distributed throughout the gardens, each containing regionally native seeds ready for spring planting.

The Spring Hoppening will also include craft activities for kids, baby chicks on hand, a photo booth, rides on a mini horse-drawn cart, and opportunities to have photos taken with a rather large and friendly bunny. The Garden’s gift shop will be open with plants and garden items for sale. Beverages, including a mimosa bar and snacks, will be available.

At 11 a.m. the first of two egg hunts begin for children up to 4 years old, followed at 11:30 a.m. with an egg hunt for children ages of 5 through 12. At noon, Wenonah Webster will lead an early spring tree identification tour, as leaves begin to bud throughout the 24-acre property. Admission is $8 per person; free for children under age 4. The event will be held rain or shine.

NEW MARLBOROUGH — The New Marlborough Meeting House Gallery’s July show, “As the Crow Flies,” is open for applications. This show seeks visual artists of any medium, within a 30-mile radius of New Marlborough, to submit up to five works created within the past three years that bear witness to their practice. The application deadline is Friday, May 20.

This year’s jurors are Em Rooney and Chris Domenick: artists, residents of the Berkshires, and professors of photography and sculpture at Bard College at Simon’s Rock. Submission guidelines and instructions can be found on the New Marlborough Meeting House Gallery website.

Introduction Intracerebral hemorrhage (ICH) is defined by the American Stroke Association (ASA) as Rapidly developing clinical signs of neurological dysfunction attributable to a focal collection of blood within the brain parenchyma or ventricular system that is not caused by trauma1 It is the second most common cause of stroke, accounting...

Derry Girls Tuesday, 9.15pm, Channel 4Lisa McGee’s joyous coming-of-age comedy returns for its third and final season, with the “wee lesbian” (Nicola Coughlan), the “wee English fella” (Dylan Llewellyn) and the rest of the gang of teenage misfits navigating the Troubles in 90s Derry. The summer holidays are coming to...